I recently stepped into a new ice cream shop down the street. Upon scanning the chalkboard menu my eyes were immediately drawn to the red hearts accompanying speculoos cookies and cream, vanilla sweet cream, and fresh strawberry. These are the staff favorites, according to the cheery employee behind the counter.

Curiously, next to green pistachio lay a suspicious red smudge.

A new assistant manager had recently revoked green pistachio’s “favorite” status amid outcry from the junior staff. She had attempted to erase the heart from the blackboard menu but ultimately left behind a faint hint of its former glory.

Nothing about the ice cream had changed - so why would its status as favorite be up for debate?

Pistachio is one of those polarizing flavors - I don’t like it at all, while some of my friends order it everywhere they go. For a pistachio-hating customer (and even some pistachio-loving ones), a pistachio recommendation is essentially useless. Put another way, removing pistachio from the favorites list probably doesn’t really affect how many people order it, since the pool of “persuadable” pistachio customers is small compared to other flavors.

The distinction here I think is between judging a recommendation on its utilization versus its objectivity. Assuming the ice cream staff are actually able to make a more objective judgement of flavor quality (I certainly would trust them more than anyone else), it makes a lot of sense for pistachio to keep its favorite status. But if you’re concerned about whether it’s useful to more customers, a great but controversial option will always see less support than a mediocre, but more palatable one.

The philosophy that centers utilization echoes the “data driven” and “user centered” ethos in tech these days. But it commits the cardinal sin of measuring the wrong thing - just because more people engage with a recommendation, feature, or product doesn’t actually mean it’s “better” - one needs more clearly defined goals. Ice cream satisfaction isn’t obviously correlated with recommendation utilization to me, and if you exist in the margin (ie, are a pistachio lover) this philosophy will only ever see your niche flavor preference pushed further and further to the edge.

A prospective ITP student recently reached out to me to ask about the program, providing a good opportunity to collect my thoughts about the last two years. Was it worth it? Is it a “good” program?

Of course, the answer is mostly, “it depends.”

“ITP is a two-year graduate program located in the Tisch School of the Arts whose mission is to explore the imaginative use of communications technologies — how they might augment, improve, and bring delight and art into people’s lives. Perhaps the best way to describe us is as a Center for the Recently Possible.

Informally, ITP also describes itself as “engineering school for artists, and art school for engineers.” A brief look at the course list reveals titles like “New Interfaces for Musical Expression,” “Live Image Processing & Performance,” and “Tangible Interaction and Device Design.”

This description is a good introduction but belies one of ITP’s most unique and defining characteristics: its aggressive opposition to structure. For better or worse this philosophy impacts every aspect of the program and student experience. 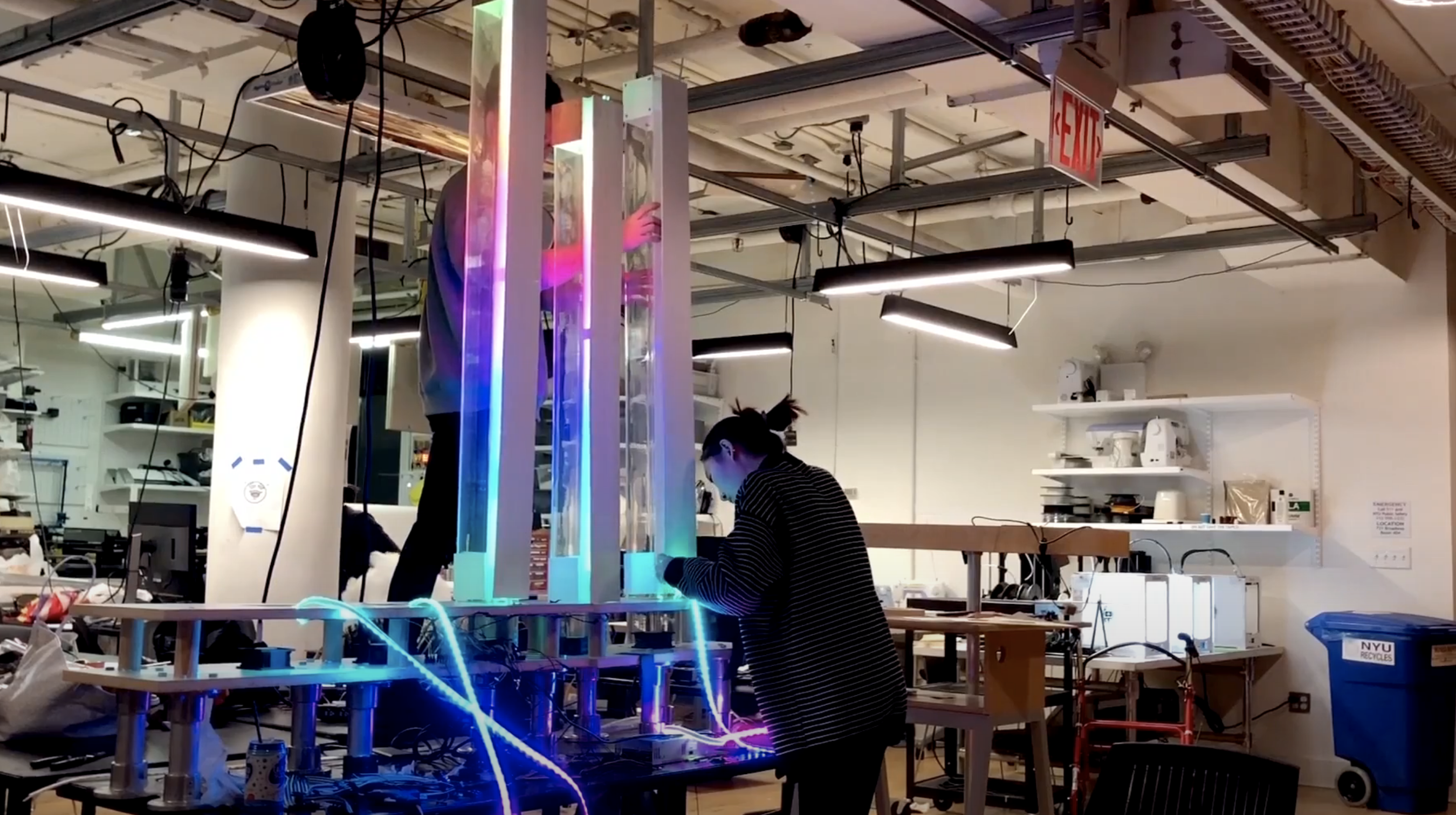 At ITP students experiment with form and content in a whirlwind tour of possibility. Sneakers play music when you dance in them, wooden sculptures contort to mirror your image, and walls of 3D printed dicks rise and fall to track the stock market. At its best ITP is a chaotic, interdisciplinary melting pot where makers of all backgrounds inspire each other to develop creative, imaginative work.

It’s easy to see how imposing structure on the chaos could stifle the creativity and exploration that ITP prides itself on, and so the program curriculum notably lacks any hint of specialization or formalization. ITP scoffs at the idea of pre-requisites, subfield tracks, and consistent class offerings. Technology changes fast; if ITP is going to be the Center for the Recently Possible it needs nimbleness and flexibility, not deep investments into specific technologies or subprograms.

As much as they would hate to admit it, ITP has a lot in common with a certain kind of Silicon Valley hacker ethos.

Although this educational philosophy seems innovative or forward-thinking at first glance it actually has deep roots in ITP’s historical origins. But interactive and creative technology is incredibly different today than when ITP was founded in 1979. While it’s true one can find contemporary content like blockchain and XR among the course offerings, the “Center for the recently possible” has yet to adjust in form to the radically different technological landscape. In holding tight to its anti-structuralist ethos, ITP can’t fully acknowledge these shifts in technology nor in ITP’s position relative to the wider ecosystem of creative tech.

In 1979, the information age had not yet arrived. The first widely commercial personal computers were still a few years away and the Internet was still a US military research project. At the time ITP was an experimental film program, where “technology” referred more to the Sony Portapek (the first portable video camera) than to Arduino microcontrollers or machine learning algorithms.

But in 2021, fully utilizing technology encompasses more than just the ability to operate technical equipment. The ability to control and direct technical equipment - in a word, programming - has become an essential part of a technical creator’s toolkit1. The ability to move from what Ribbonfarm calls “below the API” to “above the API” in the context of artistic/creative practice is one of the most valuable things that ITP graduates leave with right now, both in an economic sense2 and a creative one.

However, ITP doesn’t seem to fully recognize this in its program structure, only providing one sort-of-required-but-not-really introductory coding class. This class is taught differently by each instructor and is graded pass/fail. As a result, students enter their second semester with only the barest minimum guarantee of coding ability. Moreover, the second semester (and beyond) is a true wild west, with no kinds of “staple” coding elective classes reliably offered in any given semester.3.

Red Burns, the godmother of ITP and the original proponent for the anti-structure educational philosophy of the program is famous for saying “the computer is just a tool.” She believed strongly in the strength of creativity over technical aptitude. She goes on, “It’s like a pen. You have to have a pen, and to know penmanship, but neither will write the book for you.”

While I wholeheartedly agree with the general idea that creativity is as important (or even more important) than technical aptitude (If you don’t believe this you should just get a computer science degree!), ITPs specific attitude when it comes to computers is as outdated as Red’s pen metaphor.

You can learn how to use an audio recorder or film camera in a week. It takes years to become a competent programmer. The complexity of a computer encompasses a literal universe.

ITP doesn’t need to adopt an entire computer science curriculum. But its ignorance (or naivete) of the categorical difference between computers and other tools leads to noticeable degradations in the student experience.

One semester isn’t enough to cover everything you need to become an effective computer user. Every elective class that touches on software sets aside a significant portion of time to basic technical content that gets repeated across every class. Classes on topics as diverse as programmatic video manipulation, live sound synthesis, networked social interactions, generative poetry, embedded device machine learning duplicate literal hours of command line tutorials, Max/MSP introductions, and so forth. Do you want to take this class that uses X technology? Great, ITP will teach it to you! Did you like it, and want to go further? You’ll waste half the next semester learning the basics again, if a class on a similar topic is even offered.

In addition to the opportunity cost of wasted time experienced by probably half of the students during any given class, the wide variation in technical ability also degrades the creative aspects of the ITP experience. Conceptual critique and discussion suffers when half the projects for any given assignment are incomplete or artificially restricted in scope because of technical ability. Good penmanship is not sufficient, but it is necessary to write a book. How can students push the frontier of eg. data visualization forward when they don’t have a solid grasp on how to manipulate data programmatically?

This institutionally cavalier attitude isn’t exclusive to programming at ITP. It carries over to other fields as well. Since the 80s computer scientists, musicians, artists, writers, journalists, and so forth have gone and pioneered subfields like computer music, generative visual art, media studies, game design, data visualization, interactive fiction, etc. These fields have significantly matured as more and more people have gained access to computational tools, but you wouldn’t know it at ITP.

ITP basically completely ignores the existence and history of these subfields4, giving them only one semester’s worth at best and treating them as virgin territory still to be explored at worst. It doesn’t matter that music composition and performance has a thousands-of-years history - ITP students learn how to revolutionize music technology with a handful of lectures on the nature of pitch and rhythm. It doesn’t matter that computer music is over fifty years old with a rich set of compositional techniques built on each other over time - ITP can teach Markov chains (utilized in music in 1986, if not earlier) and call it a day. 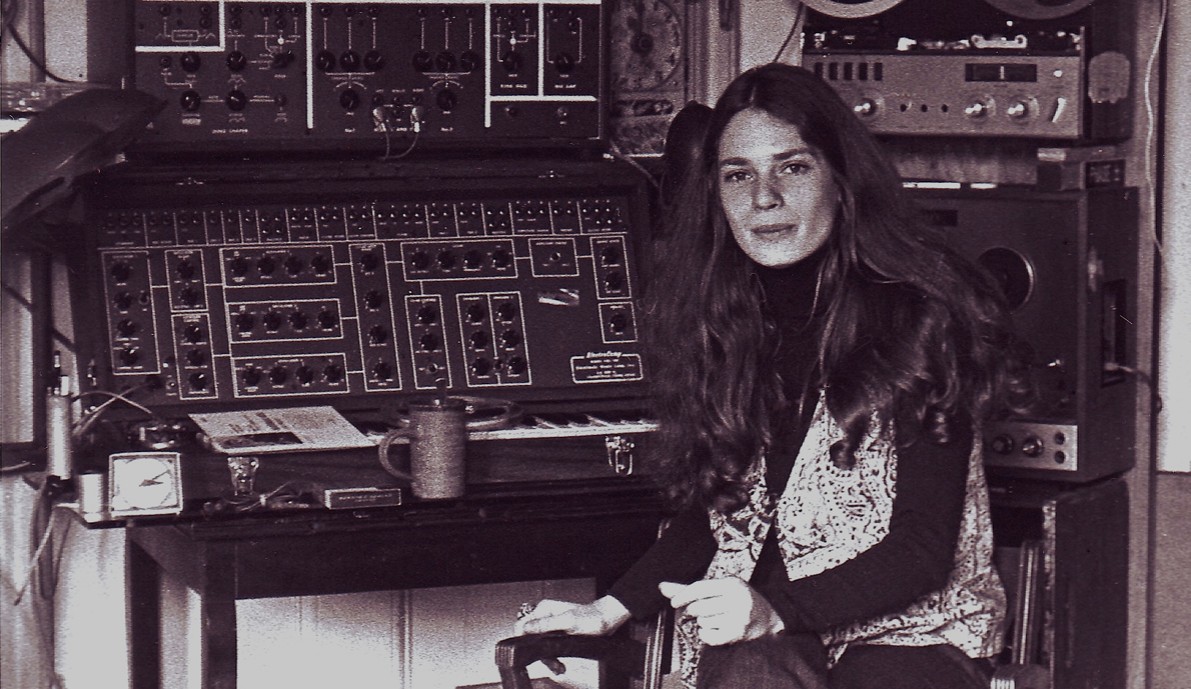 Laurie Spiegel, creating computer music at Bell Labs in the 70s with probably the same or more interesting techniques than what’s taught at ITP

ITP has no sequences of any kind. ITP doesn’t even reliably have a class touching on any given subfield during any given semester.5

This leads to a depressingly large portion of class and even thesis projects which simply retread the same ground over and over again. Students and faculty particularly interested in these subareas move on (reasonably so) to more specialized pastures6, leaving ITP feeling oddly behind the times. So much for “center for the recently possible.”

In my opinion the strongest subdepartment (if you could even call it that) at ITP is Physical Computing; is it a coincidence that Tom Igoe, a co-inventor of the Arduino microcontroller, and someone who is intimately familiar with the history of microcontrollers in creative contexts is involved?

I had lots of experience with technology coming in, and a moderate amount of experience with independent creating. I was often frustrated in looking to develop computer music and creative data practices at ITP. Instead, my favorite classes were all ones that involved simply making as many things as possible with support and critique provided by my classmates and with little to no institutional or academic content/support. I loved devoting a couple years of full time toward refining my own personal creative process and practice. I left ITP feeling fully empowered to pursue creative projects both professionally and personally, something that I certainly didn’t have before enrolling7.

ITP doesn’t need to completely pivot to teaching the state-of-the-art in computer science, music, data science, etc. with rigid prerequisites and classes all at once. The creative spirit at ITP is valuable, but I don’t think adding a little more structure would definitively kill it. There’s a lot of room for ITP to explore where exactly on the spectrum of structure it can sit.

Here are some of my ideas:

After exploring some basic audio visualization systems in 2020 (Rings and Saber), I dived into a daily audiovisual composition challenge starting in 2021.