I swore under my breath. I had barely done any climbing since March, nursing a stubborn finger strain and enjoying a comfortable urban existence. Now I was two thirds up an approach trail, probably four hours trip to cell service, a half week’s rations, overnight gear, and climbing equipment in my poorly adjusted pack. It was our first day of my first full climbing trip dedicated to alpine climbing, and I couldn’t walk. 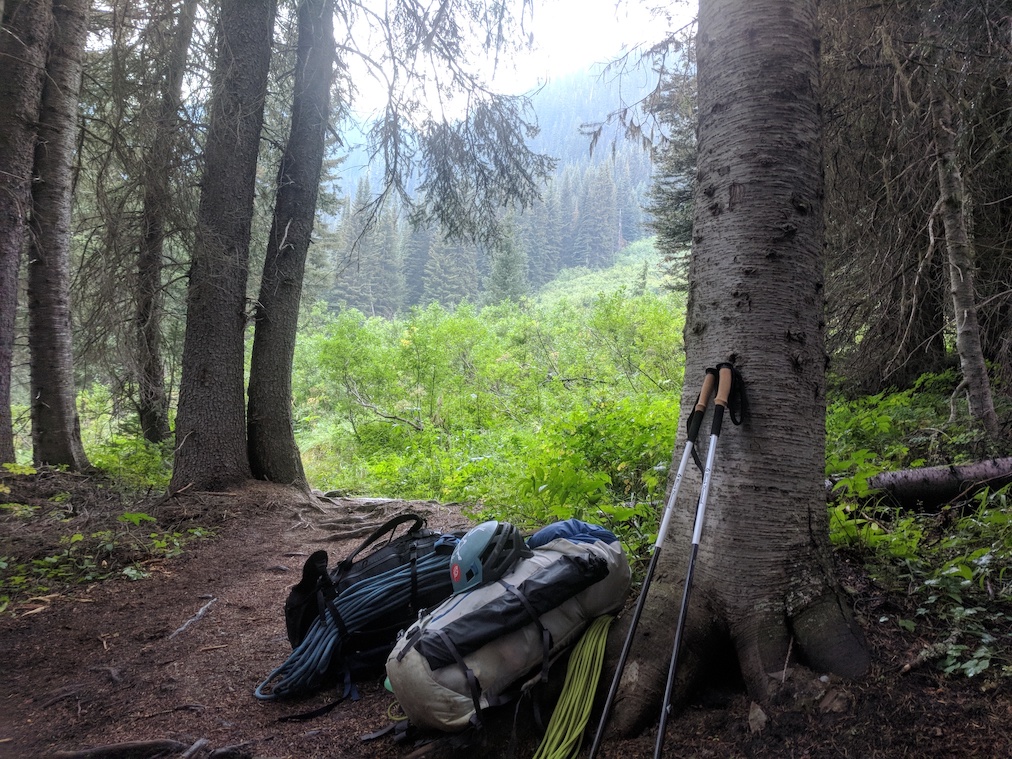 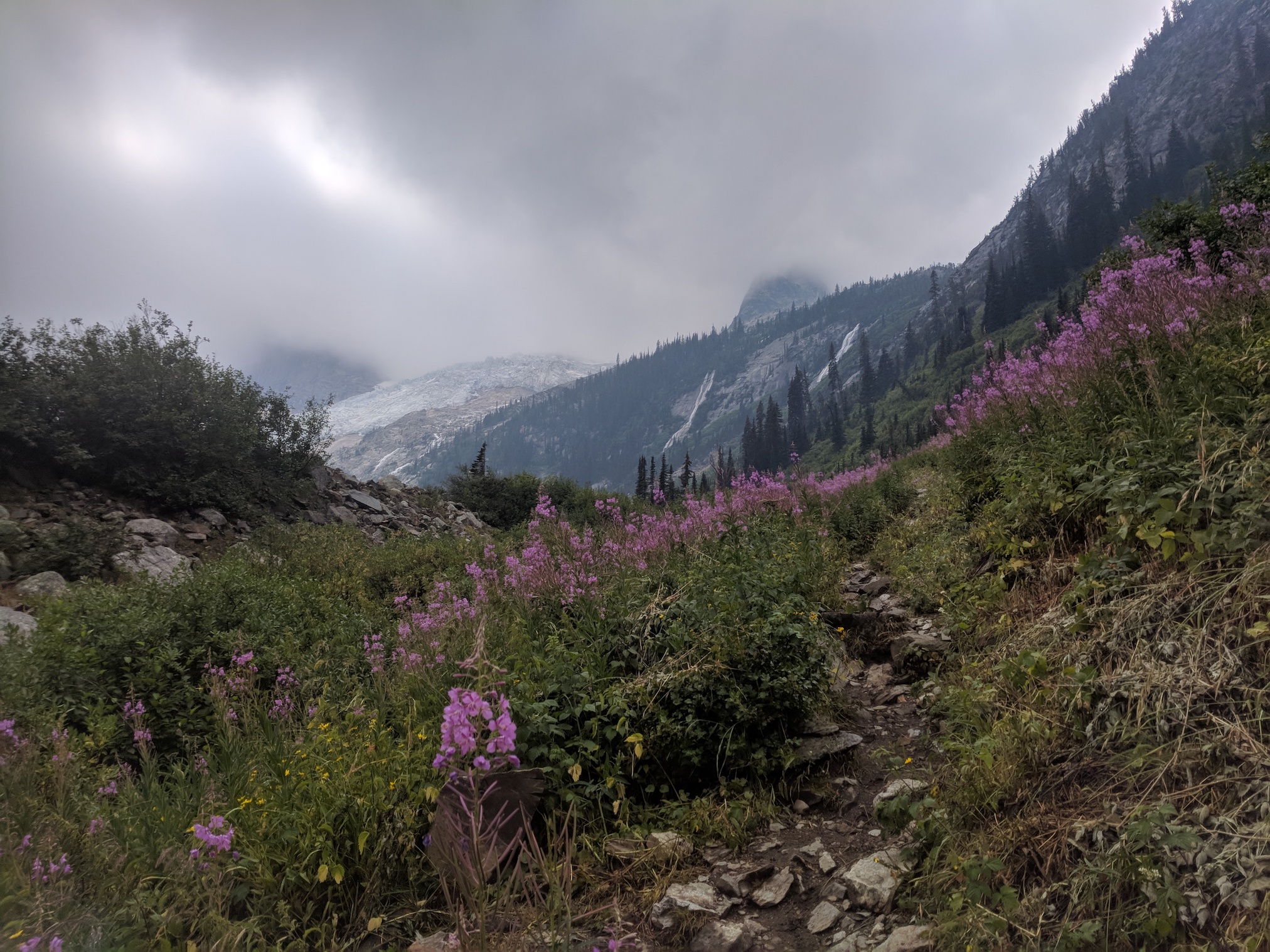 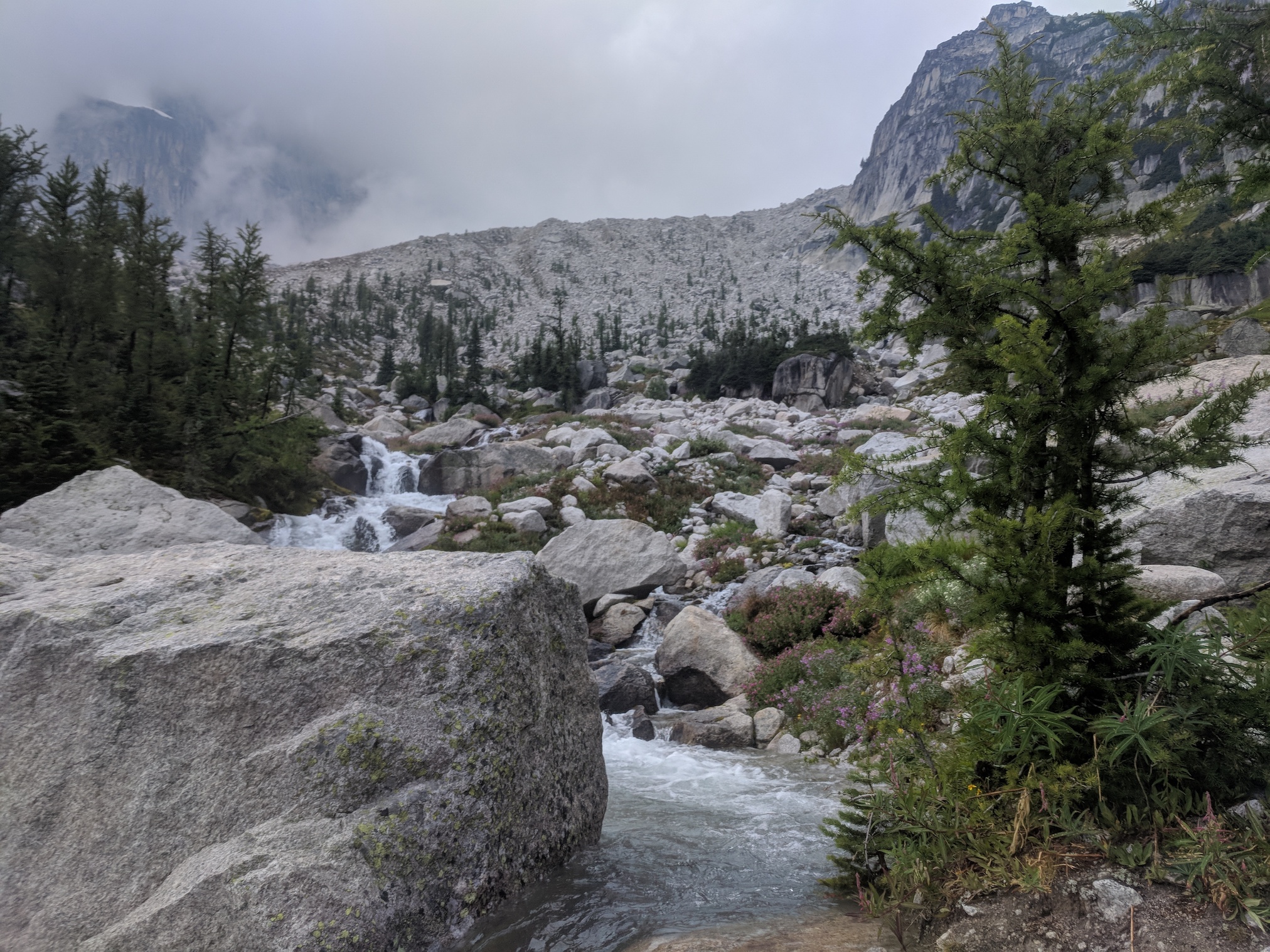 Sea of granite and elevation gain...

Jonas ended up carrying my pack up the rest of the way for me. I was embarrassed. I guess sitting at a desk five days a week, running occasionally, and doing rehab hangboard exercises doesn’t prepare you well for three thousand feet of vertical gain over a few kilometers at altitude. Whoda thunk it? 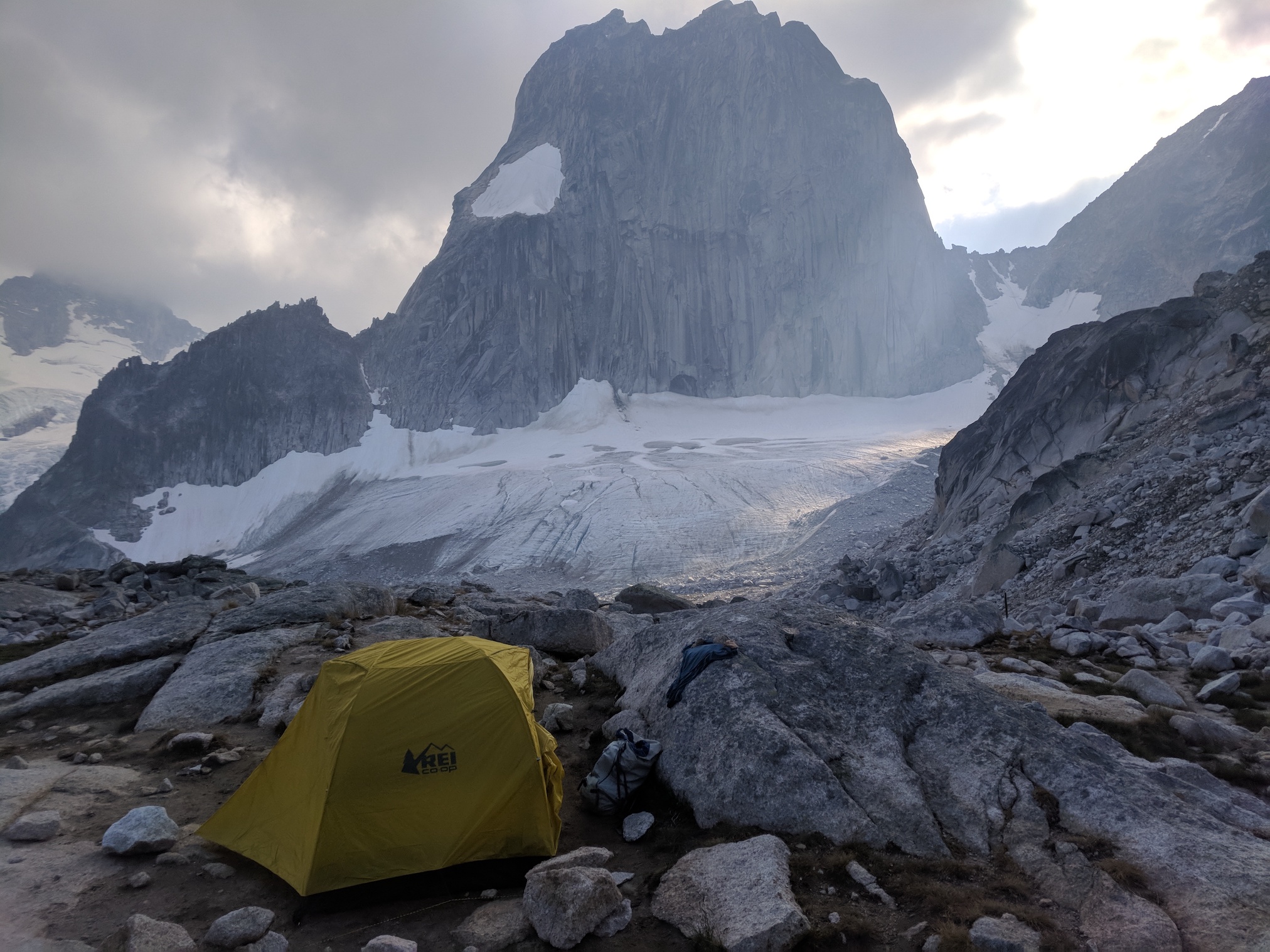 The most scenic campsite I've had the pleasure of enjoying

The NE Ridge of Bugaboo Spire

Our first objective was one of the most classic routes in Bugaboo Provincial Park, a ridge traverse of Bugaboo Spire that starts with a few hundred feet of scrambling before around one thousand feet of roped climbing generally checking in at 5.7 and finally descending the opposite ridge (the Kain route) before descending the Bugaboo-Snowpatch Col to return to camp. We made good time out of camp, hiking in the dark across Crescent Glacier toward the saddle that marks the beginning of the route around 5:00AM. 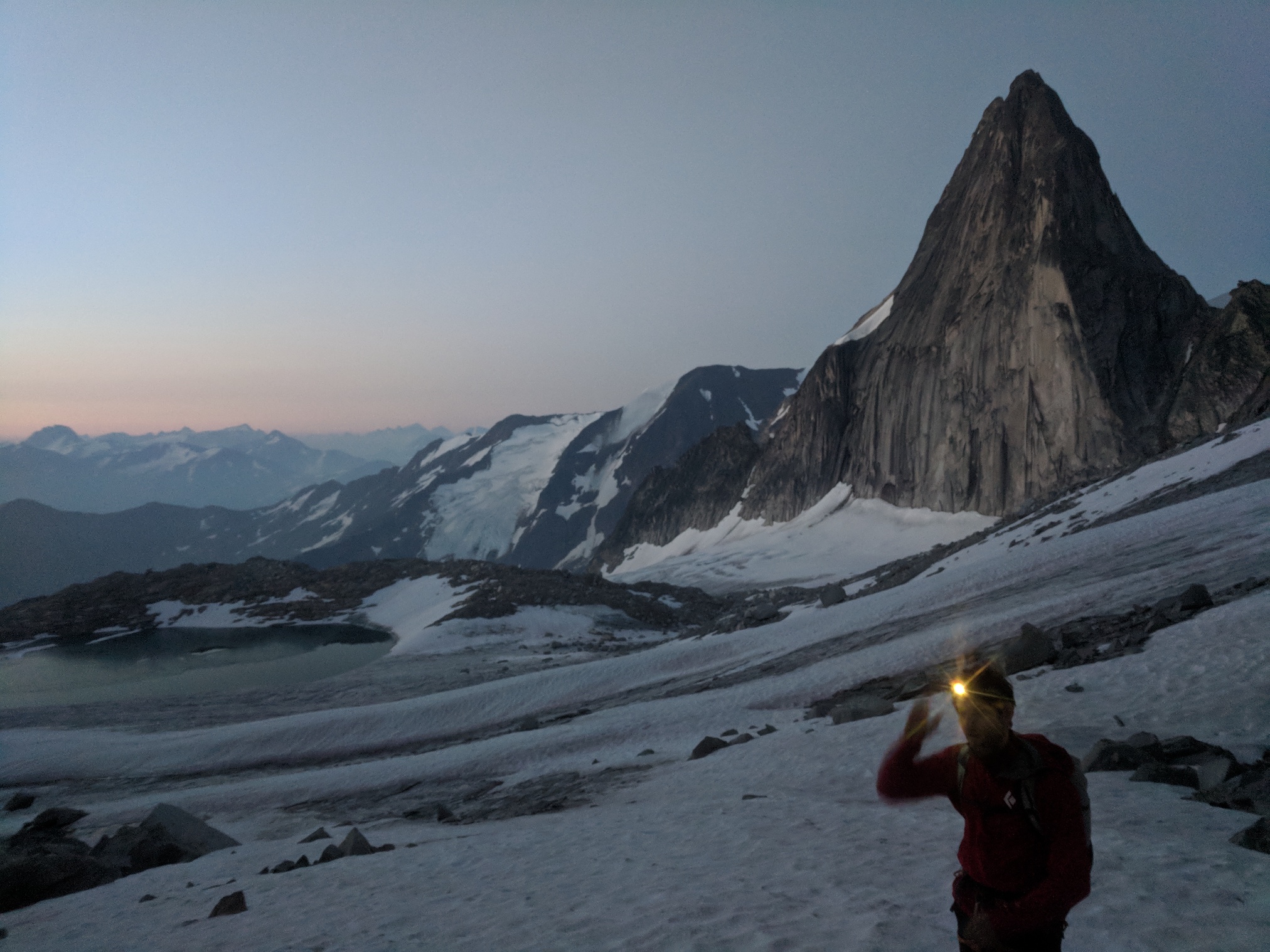 We simuled the route in three pitches taking just around 2.5 hours to reach the north summit.

Pitch 1: Begin on steep flakes on beautiful white rock and great position. 5.7 if you traverse right out the flake system at the right time, though we ended up on what felt like 5.8+ layback variation here. Link into the next pitch, more casual climbing on solid rock.

Pitch 3: Straight up the beautiful 5.8 layback crack. Continue for 500’ of blocky 5th class chimneys to the summit.

Simul-traverse the summit to reach the optional 5.10+ headwall boulder problem guarding the south summit. Jonas at 6’ was able to get some gear in before pulling the moves, which I thought were fun and engaging.

Do a few rappels (these are well documented, I won’t bother repeating detailed descent beta here), and start the interminable scramble down the Kain route to reach the Bugaboo-Snowpatch col. Rappel (recommended) or downclimb. You could get away without crampons here, especially if you partner with another group to double rope rappel at the last station, though I wouldn’t necessarily recommend it.

All in all a great climb, though I personally feel like the scramble-to-descent ratio is way too high. There are probably only around 400’ of exposed, high quality climbing above 5.6 on the whole climb. 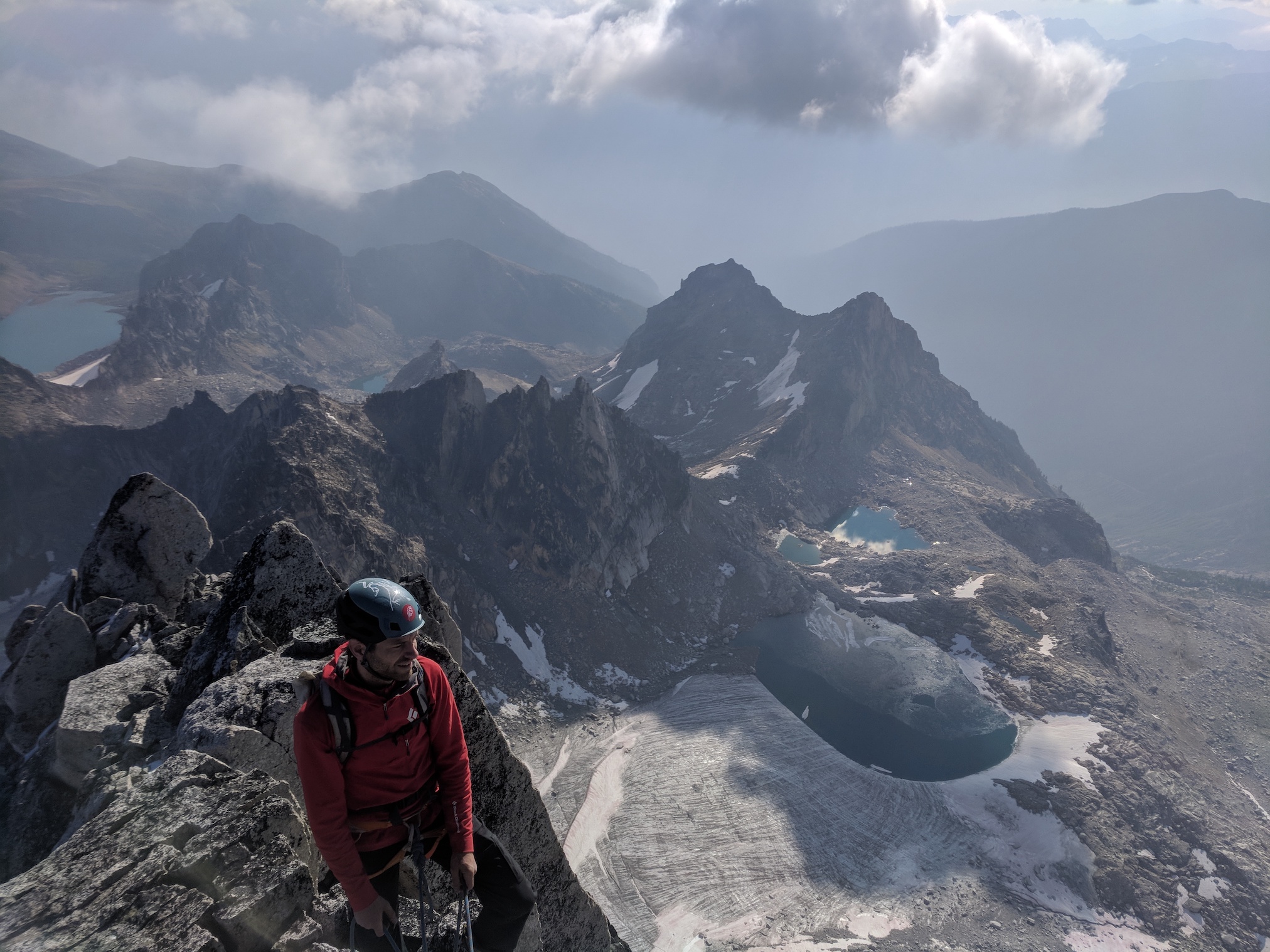 Our main objective was to climb the Beckey-Chounaird, 2000 feet of mostly 5.8 climbing with a decent number of 5.10 pitches thrown in for good measure. We decided to hike out the next day to bivy at the Pigeon-Howser col, which allows you to cut off a few hours of approach time from the Applebee campground. I was quite glad to break it up this way, as it meant that we could avoid having to climb the relatively dangerous Bugaboo-Snowpatch col in the early morning darkness.

The endless expanse of the Vowell Glacier

We used the day to solo Pigeon Spire as well, which lives up to its reputation as the “best 5.4 on the planet”. 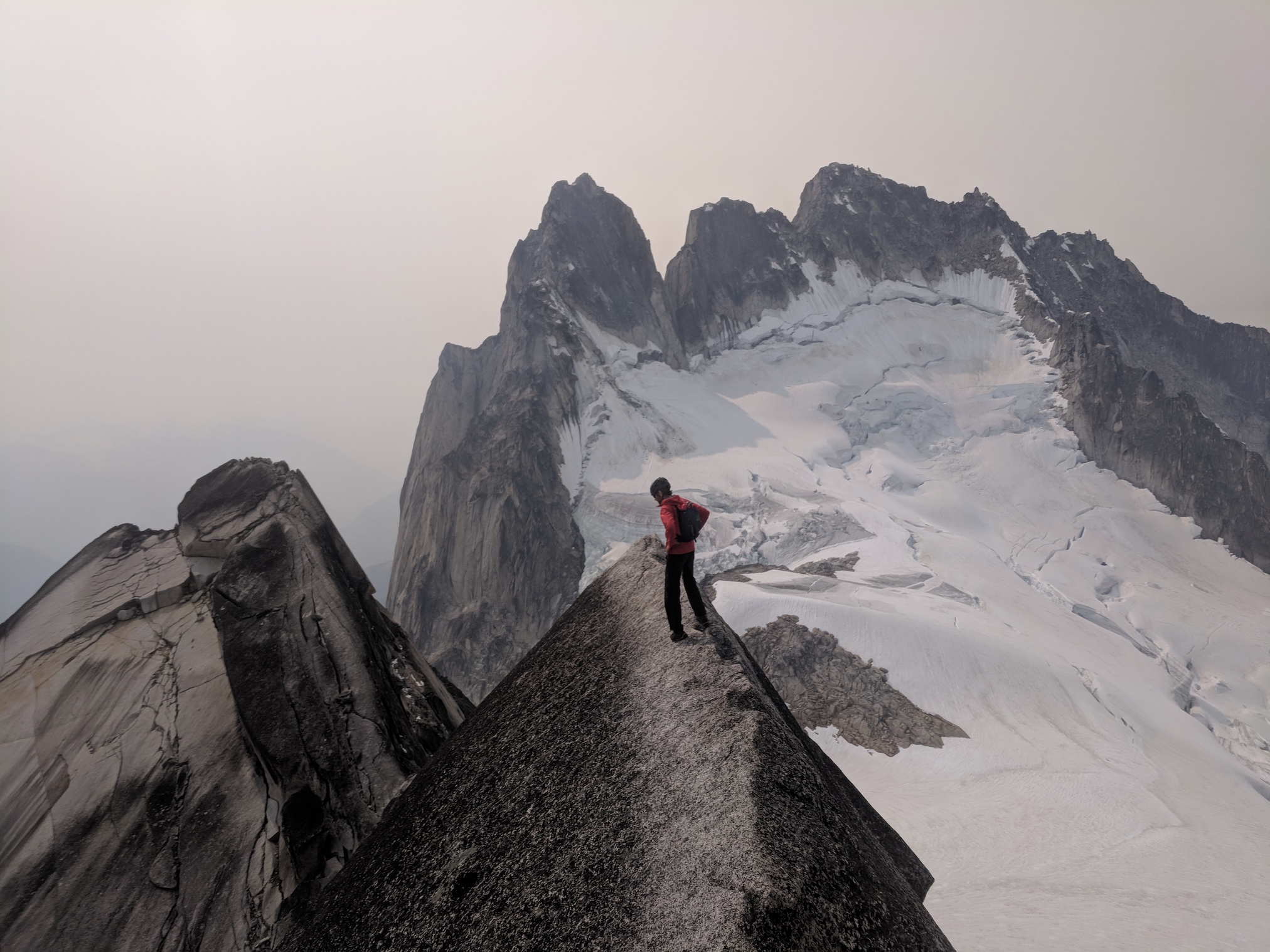 One of many perfect photo opportunities on Pigeon

We had a good amount of company at the P-H col. One other party was camping there with us, and we noticed another group bivying at the base of Pigeon Spire. Two parties passed us, choosing to camp at the East Creek Basin (gets you even closer to the base of the climb, though it requires you to retrace your steps as the descent line puts you above the P-H col). Anxious murmurs floated through the air. “I heard there were five parties at the base at 3AM two days ago…” “There are two or three groups planning to come from Applebee tomorrow morning…”

We chose to wake up at 3:30, figuring that nailing the approach in 90 minutes would have us roping up as soon as dawn broke. There wasn’t much point in starting earlier than that.

The next morning, we made oatmeal in a quiet hurry. Our neighbors, a group of three very friendly climbers who had in fact just returned from the Cirque of the Unclimbables, were beginning to stir in their tents. Despite an effort to coordinate our start-times the previous night, it looked like we would be racing to the base after all. Still in a sleepy haze we began the tricky navigation down the steep talus slope by headlamp, both silent. As we reached the glacier below we could see headlamps behind us. We began to cross the glacier, a few hundred feet downhill from the cliff base. We could barely make out the sillouhette of the ridge line we’d be climbing. Soon we had reached the base of the climb, the Quebecois behind us nowhere to be seen.

Pitches 1-3: Jonas linked these into a single simul block

Pitch 4: I took over the lead here to tackle the first 5.10 pitch of the day. The 5.10 section is obvious - a small roof guards an easier shallow corner above. I belayed at a nest of slings just above the crux, though I would actually recommend continuing up another 50 feet of 5.8 terrain to the next anchor above.

Pitch 5-6: Jonas linked the next couple pitches of 5.8 climbing into the beginning of the Great Dihedral feature, a massive 80m dihedral

Pitch 7-8: This 5.8 corner pitch is one of the money pitches for sure - It’s also quite stiff for 5.8. At the top you can choose to belay at a left anchor, though I chose to traverse slightly right and move straight up through rarely-traveled 5.5 hand cracks. I found a belay at a pin and some small gear, and would probably recommend this approach as it lets you avoid some of the loose scree ramp to the left

Pitch 9-10: Jonas climbed through a breezy 70ft section of 5.6 before arriving at a tricky headwall. He elected the rightmost option, a corner thin-hands crack that climbed through a bulge. We both thought this was harder than 5.8.

Pitch 11: A short but burly 5.10 corner fist/OW leads to a fantastic airy stance on a pillar. Endless 5.9 jugs and flakes with awesome exposure lead to a nice belay ledge. My favorite pitch on the route.

Pitch 13: Climb up a gully. I navigated through a squeeze chimney here though there are several ways you can go. Despite the topo suggesting that you need to switch onto the left face at some point I would suggest merely following the path of least resistance until you reach a very obvious hand crack in a dihedral to set the belay. I ventured out onto the steep cracks on the left face, and though I think there are variations that go that way it’s not really necessary and wasted some time figuring out what to do. 5.9.

Pitch 14: Jonas took over and cruised the dihedral to an anchor (5.8) We managed to get a #3 stuck in the crack here. Parties who climbed the route later in the week reported that it was really stuck for good in there. Eep!

Pitch 15: A nice change of pace from all the burly crack climbing, and an opportunity to redeem my routefinding failures. Boulder traverse left, and cruise the 5.6 gully to the top!

350-400ft of scrambling with more 5th class than you might expect followed. Jonas led this simul block in style, taking us to the true summit in just 45 minutes.

Rappels: plenty of beta on this online, I would just recommend ensuring your rope is exactly 60m or longer. Mine was 55m and we had to do some downclimbing to reach the rappels. Also, one of the rap stations is 10 ft above a sweet ledge. Why???

We returned to the P-H col to grab our sleeping gear and took our time hiking back across Vowell Glacier to Applebee. Col-to-camp: 18 hours. 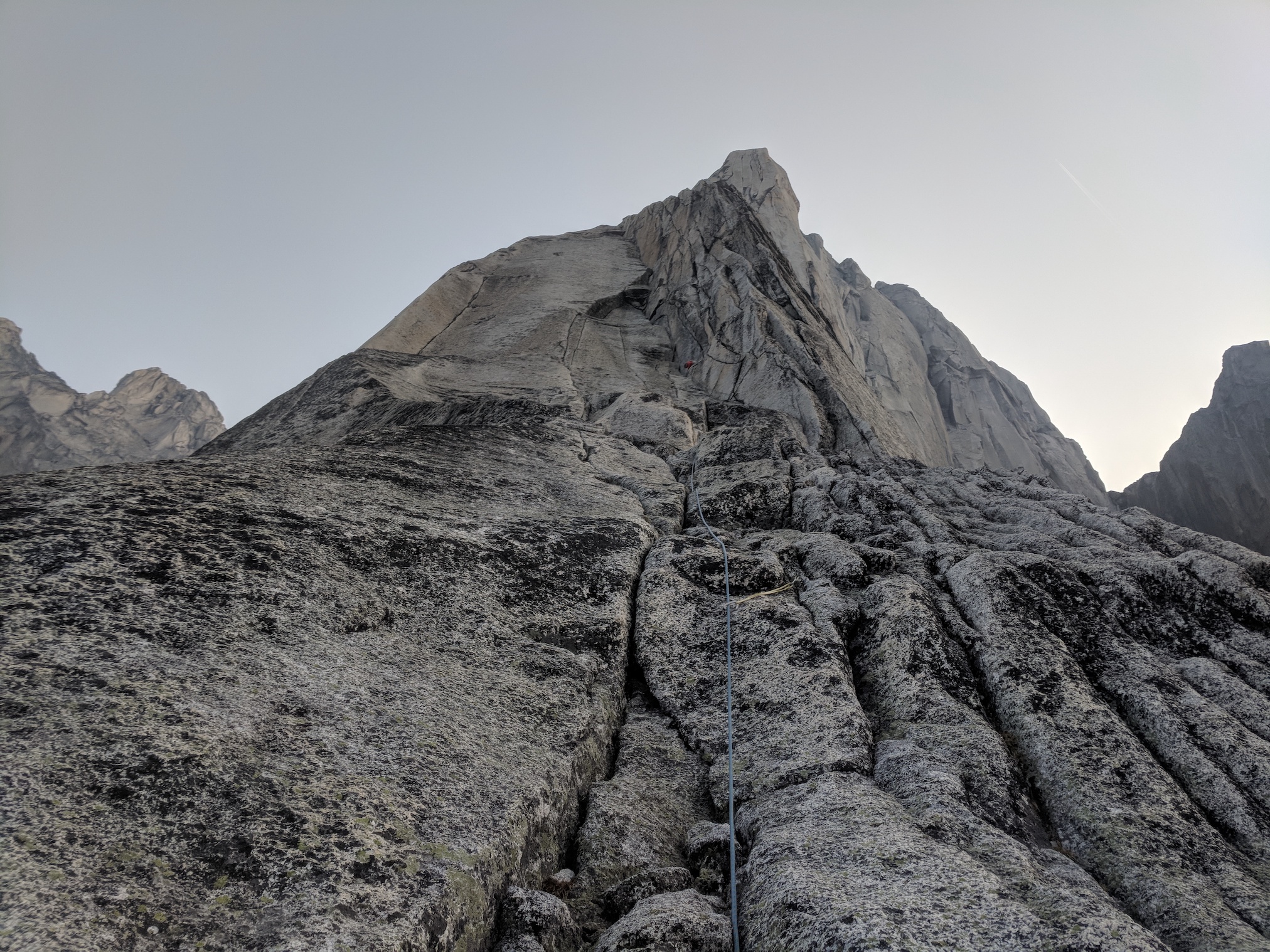 Looking up the dihedral pitches of the Becky-Chounaird